I must have one of these.  "Kirk here!" indeed.

This Bluetooth Star Trek Communicator Is Bad News for My Friends 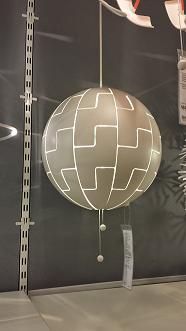 Not too many science fiction movie images last longer than that of the Death Star in the original Star Wars movie.  While walking through my local IKEA recently, I came across a lamp that reminded me of that very thing.  As I stood there admiring it, I realized it was not just me that made the association.  I heard at leat a half a dozen people exclaim, "Look, it's the Death Star!"  It gets better.  I noticed two small cards hanging down from the bottom, and at the end of each one was a small version of the larger lamp above etched into the plastic surface.  Pulling on one of the cords makes the lamp expand, or explode.  The other cord colapses it back into a sphere.  See a video of it in action here.

I had my family with me, and we were actually looking for some hanging lamps at the time, but not exactly this style.  We needed downlights for over our bar.  Did we go home with a Death Star?  Yes we did.  This lamp comes in two colors - a kind of a lime green, and an electric orange.  The color is on the inside, as you can see from the video.  The outside of both lamps is a kind of matte, eggshell white.  I installed this over our breakfast table, and no one has been able to keep their hands off of it yet.  We did get separate lights for the bar - another story for another day.

That is the fun part, but the geekiness does not end there.  IKEA has been on a push lately to convert all their lighting products over to LED lighting.  While this lamp will take a standard incandescent 40 watt bulb, it does far, far better with a 60 watt equivelant LED bulb installed.  Even though LED bulbs (especially the clear ones) are high on the glare factor, this lamp does a superior job in blocking the glare, and providing remarkably even diffused light outward, and a little bit brighter up and downward.  So, here is a stylish, if not iconic lamp, that puts out as much light as a standard pendant lamp, but it only uses 9 watts of power.  Thats barely more than the old C7 style incandescent Christmas bulbs (each).  The lamp comes with a standard sized mounting plate that wires into a standard sized hanging light electrical box.  This is a huge improvement for IKEA lamps, as most of their hanging lamps do not have standard mounting packages.  Many come with just a regular plug, as if we have all our recepticles mounted in the ceiling.  I have a digital dimmer on mine, which allows me to dial down the brightness if I so choose, but the lamp could just be opened and closed to increase/decrease the illumination from it.

I have to admit, there is a part of me that wants to paint the outside of it black, and stencil on a circle for the dish that destroys planets.  Who wouldn't love to have their own personal Death Star?  In their kitchen!

The lamp is about 14 inches in diameter, and has a ceiling mount with about a five foot cord.  Once I converted my existing can light to a standard electrical box, it took me about 20 minutes to hang it, and assembly of the globe itself only took about ten minutes.  It comes in only two interior colors, green and orange.  I paid $69.99 for it.  Part number is 602.511.23 and it is part of the IKEA PS 2014 collection.