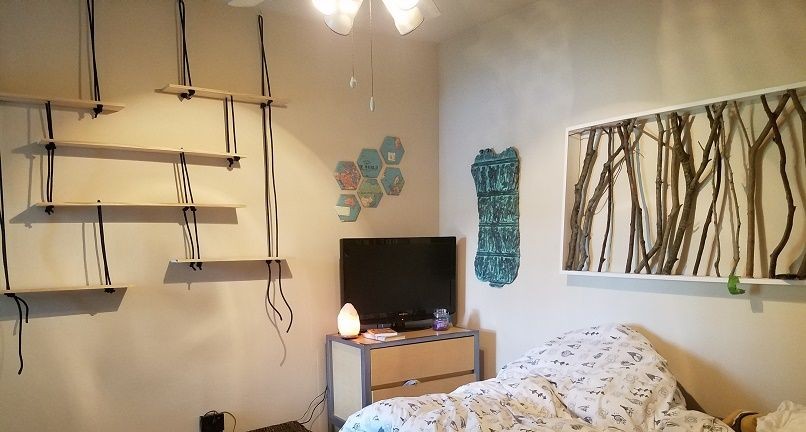 ​When my daughter was looking for ideas for decoration ideas on a budget, she drew some inspiration form ideas she saw on Pinterest and Instagram.  She was moving into a college apartment, wasn't looking to spend a lot of money, yet still wanted something unique and polished to fill those bare walls.  She developed a couple of ideas to try, and one came from Mother Nature.  Both of these projects were low cost, and ended up looking great.  There was some work involved, but the opportunity to be a maker with your daughter, and to create something new and unique was priceless.

The first of these two projects was all for looks.  The idea was to make a wall hanging that was medium/large in size, that utilized natural elements.  It is very basic construction; a two and a half foot by four foot frame, made out of scrap lumber.  The inside of the frame was cut branches found from yard waste.  The branches were cut to fit inside the frame, and hot glued into place.  We were amazed at the final product - it really looked like something you might see in a nice restaurant or hotel lobby.

To create this, we cut some 3/4" by 4" pine boards into a frame.  The dimensions of the finished frame can be whatever size you need for the space you are trying to fill, but be mindful of the horizontal dimension as the longer it gets, the greater the tendency there is to have it sag a little in the middle.  It is simple nailed together at the corners, and can be kept as natural wood, or like as we did, painted for a more finished look.  We chose white semi-gloss. 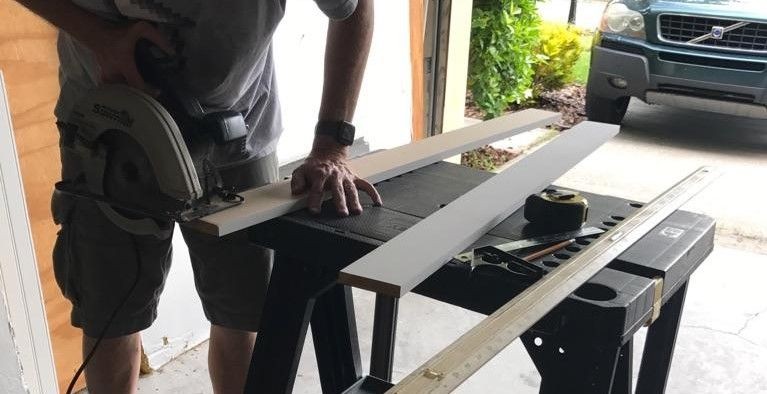 Next comes the natural part.  We collected deadwood that had fallen from some mature trees, and some clippings from tree trimming during regular maintenance in the yard.  depending on the look you are going for, you can go for all the same variety, or mix it up a little as we did.  Select lengths that are longer than the frame that you have built.  We chose branch diameters that were at least a half inch in diameter, and ones that had the most character.  From there, we cut each branch and placed it into the frame one by one, arranging for the best aesthetic. Only after several adjustments and swaps did we start gluing.  We chose a hot glue gun to attach the branches to the frame.  It is quick, sets up in seconds, dries clear, and just seemed like the easiest and fastest way to get the job done. 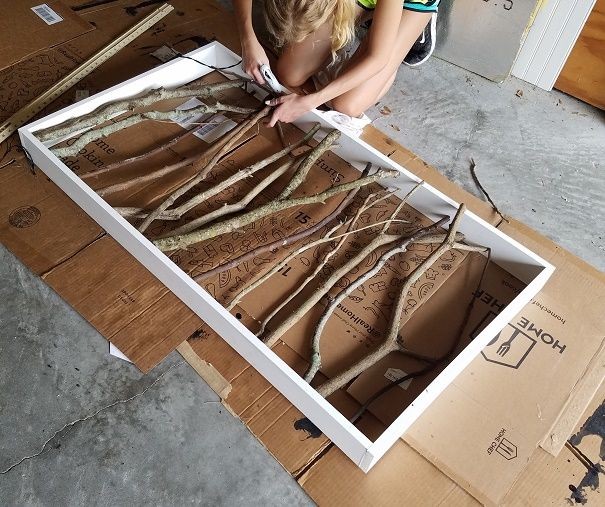 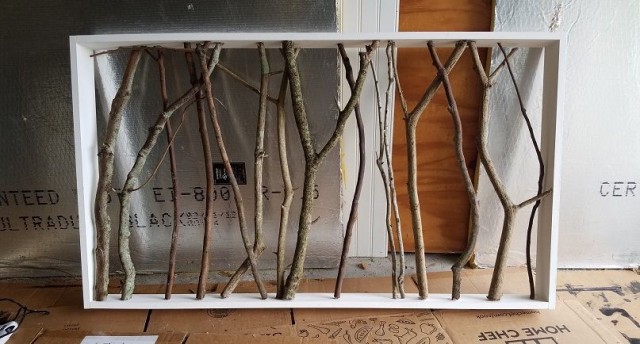 The next project was a little bit more simple.  For this idea, we just took some more scrap wood, six inches wide this time, and cut it into several different lengths.  Drill a few holes in the ends of the planks, just slightly wider than some 3/8" rope, and you have nearly everything you need for some decorative hanging shelves. To hang them, we added some eye-bolts (with self tapping threads) there were placed securely into studs at the top of the wall.  Load bearing drywall hooks could be used as well, but not knowing how much weight might be put on the shelves, we felt a more solid mounting option would be better.

Starting from the top of the wall, add two lengths of rope from each hook, line it up with holes in planks, with a simple knot under each one to act as a stop to hold it in place.  To move a shelf higher or lower, just re-tie the know higher or lower.  it will take a little tweaking to get the balance and 'look' just right, but the end result can be dramatic.

The best of this was making it, and passing along the do-it-yourself spirit to the next generation.  Making these things out of found materials was a bonus.  My daughter and I had a great time making it, and everyone who has seen it, heaps on the compliments.  I can't wait for the next project!

The light in one of the closets in my house went out recently.  Usually, this isn't a big deal, I just go to my local home improvement store,buy a new one, and all is good.  My house is about 16 years old now, and the last closet light that went out ended up having a bad ballast in the fixture itself, so the new fluorescent tube was did no good at all.  That time, I ended up having to replace the fixture itself.  I chose to replace the aging 24 inch fluorescent fixture with a modern Light Emitting Diode (LED) fixture.  Why?  Even though it was more expensive than a new fluorescent fixture, and a new fluorescent tube, the payoff came in two ways.  First, the old fixture drew 17 watts of energy, which was not much, but I knew I could do better.  Second, over the last sixteen years, I've had to replace the tube at least three times, at about 7 or 8 dollars a pop.  The new LED fixture draws about 7 watts, and I will probably never have to replace it in my lifetime.

So, the new closet light was in a larger closet.  This fixture was 48 inches long.  Before replaing the bulb, I took a look at the ballast.  It was swollen and had leaked some tar-like substance.  I figured it had to go, with the assumption that it would not last more than a year or so, if that..  A new replaceent LED fixture was a little pricey; $60-70 depending on wattage/brightness.  I decided to try something different.  Using parts on hand from other projects, I reworked the existing fixture into an LED model.  My estimated cost was about $15-20.  Read on to see how I did it.