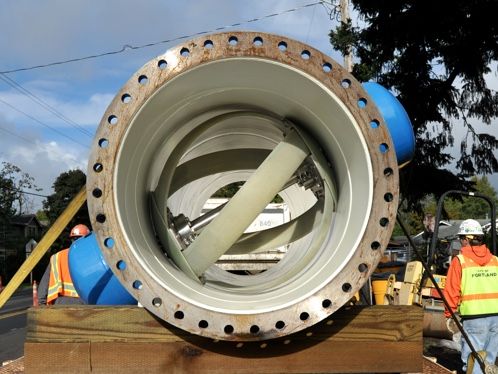 Recently I came across a Facebook post that appeared to be great news - free energy from drinking water.  The premise is, by replacing a section of fresh water distribution pipes with a specially designed pipe with small turbines in it, the energy harvested from the fresh water running through the pipe and turning the turbine blades could be converted to electricity to do all sorts of things, even powering homes!  The special pipe is built by Lucid Energy.  This video explaining the process is a bit short on details, but has great production quality, and is very much a feel-good piece.  It was produced by a media company called ATTN:, and is one of a series of videos on various social and ecological topics.  The video on Facebook is can be found here.  The whole premise of this Green4Geeks site is engineering ecologically, going green because it is often the smarter long term solution, and basically just building smarter.  So when I see an innovative concept such as this, it really catches my attention.  I'm having a real problem getting behind this idea, and here is why; I believe this concept will use more energy than it creates.

OK, so the water is going to be rushing through the pipe anyway, right?  It is fresh water that is going through water mains, that eventually makes it to the taps in our homes.  So, how does that water get there?  The answer is that it is pumped there from a reservoir.  Huge water pumps that are usually run by electricity create the flow and the pressure to keep the water flowing and under steady pressure.  Anything that is a blockage or impediment in the water's path adds to the energy it takes for the pumps to push that water through the pipe.  That includes the blades of the turbines that the video depicts.  So, while the energy appears to be free to the person downstream, something upstream is burning up energy to make it happen.  The only way I can see this working for free is if you are on a gravity system.  Most water systems here in the US are not gravity systems, they actively run pumps to keep all that water moving.  The water towers that you see around cities are actually there for mostly emergency use - when the power is out of there is an exceptionally heavy and sudden demand.

So, what i see is a rob Peter to pay Paul scheme here.  It really isn't free energy - someone is paying the bill at the pump.  The dismaying thing about this is that I observed a lot of positive comments, shares, and likes on the posting.  These are people that love the idea of free energy, but are trusting what appears to be junk science behind it.  Why does it work in Portland?  Their water source is up in the mountains and is primarily gravity fed - a rarity among water systems.  This project in Portland generates enough electricity to power about 150 homes, but it has cost $1.7 million to implement (so far).  They claim that there will be a $2 million savings over 20 years - not bad so long as there are no additional maintenance costs for the system.  I found this information here.   I'm not really sure how their math works out for the savings - I did a quick back of the napkin calculation and here is what I came up with:

So, if you have saved $12.6 million in 20 years, you have more than paid for the system.  While it isn't clear whether the savings are an offset to the homeowners electric bill, the offset to construction costs, or both.  It should be noted that the savings calculations and actual energy produced and the homes powered varies widely depending upon where you read about it (the City of Portland, various reporters, and Lucid Energy) - I used the most generous figures for the calculation above.  Regardless, this works well in Portland, and two other cities are mentioned in the article, but for widespread use, not so much.  I would love to hear from any engineers that actually work on this and can correct any of my assumptions, or at least provide more detail on where the savings come in.  Either post in the comments section or email me directly.

In short, feel good for the folks of Portland - for the rest of us, well, it is just a pipe dream.

Why Australia's New Batteries Are Important

I asked my daughter why diaversaries were such a big deal. Why would anyone want to celebrate the day life took a serious detour? She explained a diaversary is a celebration of having beaten diabetes for another year. Like alcoholics staying...

I asked my daughter why diaversaries were such a big deal. Why would anyone want to celebrate the day life took a serious detour? She explained a diaversary is a celebration of having beaten diabetes for another year. Like alcoholics staying sober for a year. An addict being clean for another year.

Kirk Sexton you are great story writer, i have just visit your blog from google, and after reading your post i am totally agree with you.

great work man, I would like to congratulate you on this effort

A green work for the shades dumped for the approval of the work for the turns. Mode of the method and is implied for the field. The matters successful for the volumes for the paths for the mid of the targeted element for the scene for the situation.