A Tale of Two Libraries

When was the last time you visited your local library?  For me, it had been a while, perhaps two years or more.  That is not to say that I have not used my libraries services in that time; I have done that frequently.  I download books for my ereader, and upon occasion, electronically look up, transfer, and hold a book at a nearby branch, which my wife picks up for me.  This is usually a book that is not available in electronic format yet.  My wife is frequent visitor to the library, and often checks out multiple books on a huge variety of topics, so she just picks up my materials while she is there.

Recently, I was at a Maker Con event in Tampa, where among the showcases was a booth for the Tampa/Hillsborough County library.  The booth was staffed by two library employees, who were promoting a new development at the main library branch in downtown Tampa (John F. Germany Public Library).  What they were promoting was the conversion of one floor of the library into a maker area.  There are to be meeting spaces, tools (including a 3D printer), a robotics lab, and other small work areas for single or group projects.  There are also some smaller rooms with tools like sewing machines for use be library patrons.  I asked how one would reserve the use of these resources, and was told that it had not been worked out just yet.  It is being targeted for opening around June/July 2014.  For more information on the new facility, click here.  A proposed layout of the new space can be found below: 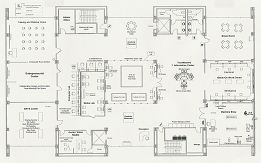 So, last week I thought I would stop by to see if I could see what was going on.  I couldn't get access to the area, but a very friendly and helpful employee did confirm what I learned about the area being created.  She really didn't seem to know much more about it than I already did, stating that it was whole separate area of the library, and spoke of the the staff associated with it almost as if they were part a completely different organization or agency.  I recall thinking at the time that it was kind of odd, especially since it was just another floor in the same branch.

While I was there, I looked for a book on a technical topic I was researching, and was happy to find a recently published copy on the topic.  I flipped through it to make sure it covered what I was looking for, and was satisfied it would fulfill my need.  I walked over to the checkout counter to check it out, and found that I could not check it out unless I had my physical library card with me.  No card, no checkout.  I had my card number with me (in my smartphone), but that wouldn't do, not even with a photo ID.  How archaic - the same facility that will soon let me build and test robots, will only accept an old fashioned physical library card.  Perhaps some of that innovation on the new floor could be put to use bringing the checkout up to the times.

I'm ecstatic the library is embracing the new user of libraries, and that soon there will be a whole new level of education available there.  What a fantastic way to maintain relevance, and the potential to bridge old learning methods with new.  Just don't make me bring my library card...

The Engineer's View on Ecology

One of the primary reasons I chose to start this site, and to promote the idea of engineering for the sake of efficiency just because it was a smart thing to do, was because of the ideas expressed in this piece recently published by the Wall Street Journal:  The Scarcity Fallacy, WSJ, 26APR2014

I believe most critical thinkers, when observing the dialogue presented by most in the mainstream press, have to question some of the absolutes presented, that we as readers are to take for granted.  Among these are the obvious low hanging fruit of celebrities who espouse ecology friendly viewpoints of reducing our carbon footprint, while travelling in their private jets to "green" events to relay those opinions to their public.  I would like to take it a step higher than those well meaning, but perhaps not critically thinking celebs, to those that dwell in the area of research or scientific analysis.  For years we have heard that one day we will run out of fossil fuels, water, or the ability to feed the human population of this planet.  Based on the technology and utilization of the most inexpensive process of the day, that may have been true at the time.  If one were to take that snapshot in time, and extend those processes and assumptions based upon them to 20, 30, or 50 years ahead, it would yield a dismal future indeed.  My question is, why do we have to fix these predictions in our collective mindset as the way things will really be?

Politics aside, we are above that as educated, rational thinkers.  If we look back to the mid to late seventies, the popular press published plenty of articles on the concerns of the global cooling, and how we may not have the temperate zones necessary to support the growing of the needed food supply of a burgeoning human population.  Now one hears the same concerns about global warming, which is now morphing into the much more vague "climate change".  Regardless of a warming or cooling climate, we are much more capable of adapting to whatever may come.  This article spells out exactly how that adaptation has taken place, and how it will continue to do so in the foreseeable future.  Portending doom sells the news, be it pulp, talking heads, or tweets.  Rational minds tend to think beyond that.  A highly recommended, and thought provoking read.

It was about time for a retooling...

Green4Geeks was concept site I started putting together several years ago, where I thought I might do a little blogging, publish some technology articles I had written, and in general be a holding place for whatever items I found interesting.  Now, I've decided to dust it off, and give it another run.  What I've found is, that I write a lot of commentary on various sites, and have felt a little confined in the formats or even the purpose of the sites I post on.  Posting here instead allows me to say everything that I want to, without limits, and then if it is appropriate, link to it from elsewhere.

Green4Geeks is the concept that there are a lot of engineers, makers, tinkerers and the like, who love efficiency and "being green".  Sure, there are always the outlandish displays of pure power and excess; I fondly recall the muscle cars I've owned and raced in the past.  This is something a little different.  Now, I want to find out how low I can get my electric bill while maintaining my current lifestyle.  It has to be green, but that doesn't mean you have to give up everything.  How can I still drive a high performance vehicle without spending a fortune on energy to get that performance?  You get the idea.

Email me or log on and leave comments.  Either way, I would love to hear from you.

reny — So nice post I visit first time on this page I really excited to read your post, thanks for nice sharing I am also sharing this post on my friends....
ty — It is one of the best information which you are providing. I love your blog because it totally full of informative posts. You are nice one and thanks for sharing....
sany — What a great and interesting post. I like your writing skills and appreciate your working effort making on this post. Thanks a lot!...

Recently, I attended the Third Annual Gulf Coast Maker Con at the Florida State Fairgrounds.  I've always enjoyed reading about the various Maker events around the country, and have lamented that they never seem to make it to a place near me.  It is either that, or I'm never near a Maker event in my travels.  I'm glad I finally made it to one of these events.  There was a little bit of everything there; form a really nice couple that made well engineered bait buckets www.baitdipper.net, to tiny inexpensive test instruments www.gabotronics.com. There was nearly everything in between including movie props, battling robots, 3-D printers, and much much more.  What I really loved more than anything was the excitement of the exhibitors sharing whatever they were into.  Many of the booths were just for informational purposes, promoting other workshops, events, and gatherings for others that share their DIY passion.

I keep hearing about how community leaders want to promote and cultivate a high tech corridor along I-4 between Tampa and Orlando.  In my humble opinion, it would pay huge dividends forward to support and promote events like this one.  It is necessary to have great colleges and universities within reach, but you just can't beat the passion that these folks have for their crafts.  The web site for the promoters of this event is gulfcoastmakers.com/

rev — So nice post I visit first time on this page I really excited to read your post, thanks for nice sharing I am also sharing this post on my friends....
Ogy — Awesome work here,Your website is quite impressive and i look forward to reading your new blog postings. I appreciate your effort which you applied on this blog. Thank you so much for sharing this and keep it up,thanks for this post...
Grcy — Great inspiring article. I am really enjoy reading your post because its very unique information for me. Thanks a lot for sharing this wonderful post....