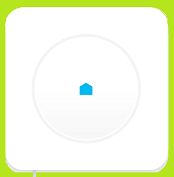 I've posted my experiences with Wink here and elsewhere for a few months now.  While I've enjoyed tinkering with it, in the back of my mind I had this nagging thought that it might not ever be a robust enough platform for serious dependable use.  That thought diminished considerably with latest upgrade.  To be fair, first let me spell out why I thought it might not be ready for prime time:

Most of these issues are well documented in the various forums that have popped up around this product.  Even though their customer service is really good (I say this from personal experience), I just got the impression that they weren't taking the cues from the user experience and using them to improve the product.  I think this last update may be a step in the right direction.

The first indication I had that a new product was available was a small message at the bottom of the screen on the Wink Hub page of the app.  It stated that, 'A hub update is required'.  Clicking on the 'Update Hub' button, I was warned that it could take 10 minutes to update, and that normal operations might be offline during that time.  I went ahead with the update.  I immediately got a message on the app that, 'Hub is updating', while a circle spun around the hub icon.  At the same time, the indicator light on the Wink Hub went from solid blue to a flashing yellow-green color.  This went on for about a minute, and then the light started flashing red.  This went on for quite a while, much longer than the advertised 10 minutes.  After a total of 17 minutes, the hub indicator returned to a steady blue, and a Wink notification appeared on the status bar of my android smartphone.  However, the spinning circle around the hub icon and the message stating 'Hub is updating' remained.  I gave it a few minutes before hitting the back button to close the page.  That seemed to clear the 'updating' status.  Checking the version of the hub firmware indicted that I am now on version 0.77.0.  It seems to be an odd version number for a shipping product, but hey, let's see what changed.

The first thing I noticed was that the indicator icons on the app were actually showing the state of the devices as they were at the moment.  I had one light partially dimmed, and another set of lights turned on.  The app indicated this correctly.  Secondly, changing the settings on these devices was nearly immediate.  The delay is now definitely sub-second.  As far as the hub firmware update process went, it was much better than in the past, but still has a little ways to go before it is polished.  For example, when it went from flashing yellow-green to flashing red, makes one think something has gone horribly wrong.  Also the nearly double the predicted time created some unnecessary nervousness.  Telling the user this would happen before hand is better, and telling the user what is happening as it is happening is even better.  Still, this went way better than the first update I had to do when I first purchased it.  A step in the right direction.

Next I tested a few schedules out by making up a few new ones, then closing the app and waiting to see if the events I set up worked.  This worked reliably in my tests, but I did notice that the events kicked off almost a full minute behind the system time.  My guess is that the cloud that Wink uses to manage events is probably a minute off from my local system time.  The best part though, is that when I checked my apps icons, they accurately reflected the state of the events I had scheduled (including such details as the dimmer level).  This is a huge improvement.

Lastly, group events such as turning all lights on with one push works great and the icons reflect the true status of the individual lights.  However, I was able to cause the app to fail by turning on the lights as a group, and then turn them off individually, causing the app to lose track of the state of the light.  Not polished, but better than before.

It appears the developers at Wink are listening, and while they may not be as speedy as most would like (that too is all over the forums), they are moving in the right direction.  I'm no longer in the mindset of dropping it for something different, but I would definitely like to see a more robust product.  One thing that I can't shake is the inability to get under the hood.  Not everyone that will buy this product wants that kind of access, but many of us out here like to tinker, and at least have more indication of what is going on the hub and app.  It is kind of like buying a car, and not being able to put custom wheels on it, much less custom engine performance products.  The Wink team needs to put the more technical information out there for those of us that can use it.  It just might boost sales among us DIY'ers.

I have read many more blogs and its about the unique technology. This site provide the good system for check it for more process. Like this things use in sycology for patients.

This post is basically relevant to the maturity level of a person to handle all issues. You can evaluate the to get the best tips through you can use the related wink apps and learn how to use it. Writing skills are those point which attracts a...

This post is basically relevant to the maturity level of a person to handle all issues. You can evaluate the to get the best tips through you can use the related wink apps and learn how to use it. Writing skills are those point which attracts a person sigh in an blog.

I am interested in this topic and would like to find out some more information as my friend need information on this topic. Do you have any other articles about this?

Excellent article. Very interesting to read. I really love to read such a nice article because it is very informative and useful for me. Thanks for nicely sharing.